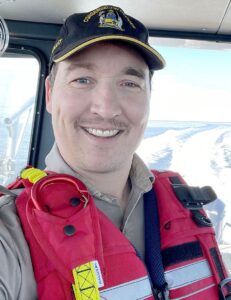 Joe Savikataaq, Jr., is a Conservation Officer and Mayor of Arviat, Nunavut, a fly-in only community which sits along the coast of Hudson Bay and is directly on the route that many polar bears take to reach the growing sea ice in the fall.

Joe grew up in Arviat, in the heart of polar bear country. He’s been protecting polar bears from people and people from polar bears since 2012 when he became a Conservation Officer with the Government of Nunavut.

Today he runs the only polar bear deterrence program that focuses on live capture, transport and release of polar bears. Polar bears depend on sea ice for their survival; in the fall Arviat is right in the middle of the migration path of polar bears waiting for the annual freeze-up when sea ice reforms after months of summer melt. During a busy year Savikataaq’s innovative program deters as many as 223 bears migrating through and near Arviat, a traditional Inuit community in the Arctic that is home to about 2800 people.

Joe enjoys the challenges and rewards of finding ways to balance the needs of both polar bears and people. Before becoming a Conservation Officer he was a heavy duty mechanic; those skills came in very handy when he was designing and building his first polar bear trap.

In addition to piloting the boat he uses in his work Joe is also a member of Arviat Search and Rescue and the Arviat Coast Guard Auxiliary and frequently goes out on rescue missions when people are lost, broken down, overdue or otherwise need help. Joe is also a licensed pilot and flies a float plane.

The Arviat community is known for its hunters and artists, including painters, carvers, sculptors, seamstresses and singers.